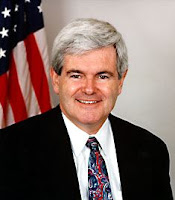 Sorry to sound so mean - I know he wanted to be president so bad and change the world with his fantastic, imaginative ideas that nobody else would think of.  I guess the hope and dream of $2.50 per gallon gas is gone, too, dying with the last remnants of his failed campaign.  My dream house on the moon will probably never happen, either.

But the reality is that Newt needs to go away now and let the party coalesce around Romney, who certainly appears to be the the G.O.P.'s nominee for 2012.  Not that I'm a soothsayer or anything like that, ESPECIALLY when it comes to Republican politics, but Romney has the momentum and money to wage war against the present administration -- but he won't have the financial resources he needs to deal with Obama on the campaign trail if he has to be combating both Newt and the altar boy.  I think it's safe to say that Santorum is too polarizing, even for the Catholics (who never seem to quite get behind him) to have a realistic shot at the White House, either.  In fact, I'd like to say goodbye to the both of them and get down to the business of trying to figure out who Mitt Romney really is and whether or not he might be able to do a better job as president then our current one is.

So long, Newt.  It was a good run and you had some interesting moments.  Best of luck to you and the present Mrs. Gingrich.  See you on the dark side of the moon.

June 21, 2019
Well over a year ago (going on 2, I think) my wife and I made the decision to stop paying the ridiculous amount of money we were shelling out each month to the cable company and we starting streaming our T.V., paying the cable company probably way more than they deserve for Internet access, but foregoing the extra ~$100 a month for mostly garbage we would never watch, anyway.

At first, we subscribed to Sony PlayStation for our streaming TV needs, as Sling didn't work well for us (constant buffering) and lacked the channels we really wanted at the time, such as Fox News. For the record, I would think that Sling would have improved their quality in my area, but can't say for sure (have not tried them since). Too bad, though -- Sling was definitely affordable. Anyway, we dumped PlayStation TV as well (they went up n their price quite a bit) and tried AT&T's Directv streaming service. At first, it was satisfactory, but then started buffering like Sling did. Too bad, we lik…
Post a Comment
Read more