Global Warming? Ba Humbug... Or Is It? 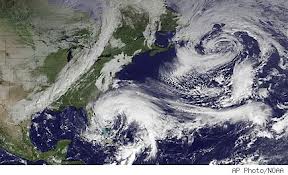 The photo is of the most recent storm to plague our area in October, Sandy. Many conservatives (most) claim that global warming is a hoax perpetrated for political gain by those on the left to advance their "green agendas." I, although more conservative in my viewpoints than younger days, do not subscribe to that train of thought and think that global warming is real. Such issues are why I don't think I could ever become a full-fledged Republican. Think about the storms we have had in the past two years. My brother, who lives in Westfield, Massachusetts, suffered tornadoes during the summer and a nice ice storm last October. We had a crazy October snow storm, hurricane Irene and this year's event, Sandy.

Conservatives will dismiss this and say that it is either a coincidence that we have had a couple of bizarre events these past two years or they will say that it is not normal, but part of a normal pattern of weather changes that would happen regardless of the stuff we spew into the atmosphere and water around us. Usually such an attack, because their position is getting weaker and weaker in the midst of the mounting evidence of unusual events, turns to personality attacks on folks like Al Gore or a denial based on claims that there is no hard scientific proof to confirm the "theory." Perhaps one of them will finally admit its reality when he or she is standing knee-deep in water with a tree stuck up their behind. Crass, perhaps -- but the point needs to be made.

By the way, happen to catch the most recent cover of Bloomberg Businessweek?